Open Discussions aimed to stimulate the discovery of new possible perspectives on Kastellorizo, an island with a complex historical and cultural identity.

Setting aside the concept of the commercial gallery’s white cube, we exhibited the works of seven international artists in a typical Kastellorizan house. Kastellorizo has been, and continues to be, the locus of events which reflect the themes the works exhibited dealt with, all of which contemporary art is also currently committed to exploring: geopolitics, climate change and cultural identity. Kastellorizo is a Greek island only a few kilometers from Turkey, a land with a recent history of conflict and encounters between cultures. Tragically, all of its inhabitants left the island in World War II, when every citizen was forced to emigrate. Since the post-war period, many Kastellorizani have returned, regaining possession of the houses they had to abandon, while others are still far away. Today, between the paradisiacal vistas and the fragile ecologies of the island, there are increasing flows of tourists, while tensions on the Greek-Turkish front are strong.

The island is a complex cosmos in which renovated houses and ruins coexist, and where ferries, yachts and fishing boats mingle with Turkish and Greek warships facing each other in military exercises.

Open Discussions did not propose defined narratives or solutions to existing problems, but aspired to be a space in which dialogues could be opened and reflected upon.

The exhibition opened with the work of Julie Roch-Cuerrier, who reflects upon the fragility of printed paper and, with it, questions the ways in which history and culture are written and conceived.

Roch-Cuerrier worked with an atlas from the 80s, scraping off all the maps with sandpaper. From the colour powder obtained in the process, she created monochromes, the Atlas Paintings.

Through this gesture of deletion and new interpretation, Julie criticizes the presumption of accuracy of our cartographic conventions, which never result from neutral historical processes, as the history of Kastellorizo can testify.

The sculptures of Zuza Golińska aim to reintroduce the notion of a system in an island that is often isolated, both geographically and materially. Red Giants, red totems made of recycled steel, allude to one of the final stages of some types of stars, when they grow exponentially, incorporating whatever comes into their orbit.

While conveying a sense of urgency, they also underline how strong is the interconnection between all the entities that exist in the universe, human included. Thus, Red Giants encourages us to take action on threats we can still act on, such as global warming. In fact, their red color and the pigment powder that surrounds them are a clear allusion to the multiple fires that afflict our planet.

This work was particularly significant on the island which, during the exhibition, was surrounded by territories on fire, Rhodes and Turkey. While swimming, tourists found ashes in the water. Suns belong to the same research. While again presenting to the viewer the awareness of belonging to a system, the totems foreshadow a possible scenario in which the sun takes over any other natural element. Šárka Koudelová, Their Culture, Exotic, Our Culture, 2019, oil and acrylic on wood

Two political works followed, one video installation by Nasan Tur, Histories of Maraş /Varoshaby, about a district of the ghost town of Famagusta in Cyprus, and a triptych painting by Šárka Koudelová: Their Culture, Exotic, Our Culture. Although presented in a very different way, they both underline the weaknesses and the contradictions of political propaganda.
These works are particularly meaningful for Kastellorizo, an island that, due to its close proximity to Turkey, is subjected to tensions and a strong nationalist sentiment. The installations by Sari Ember Tent and Figures with Belongings interrogate a different issue – the significance of archaeological practice on an island where the meaning of archeological artefacts is still to be defined.

Ancient vases, found on Kastellorizo every time a house is built, are sometimes donated to the local museums, while others are kept at home, perhaps as identity symbols, or as personal treasure. There was also space for playful irony in this exhibition.

Bright Future, a canvas made of confetti by Emese Benczúr, shone in front of Maps Like Balloons, papier mache globes made by Chrysanthi Koumianaki which show imaginary cartographies which challenge the consolidated logics of power linked to geopolitics. The show ended with the flags created by Koumianaki for Open Discussions, one placed on the gallery facade and one on a house overlooking the city harbour. Flags Like Seas draws inspiration from the geographical position of Kastellorizo, where the sea is a bridge between Greece and the very close shores of Turkey. 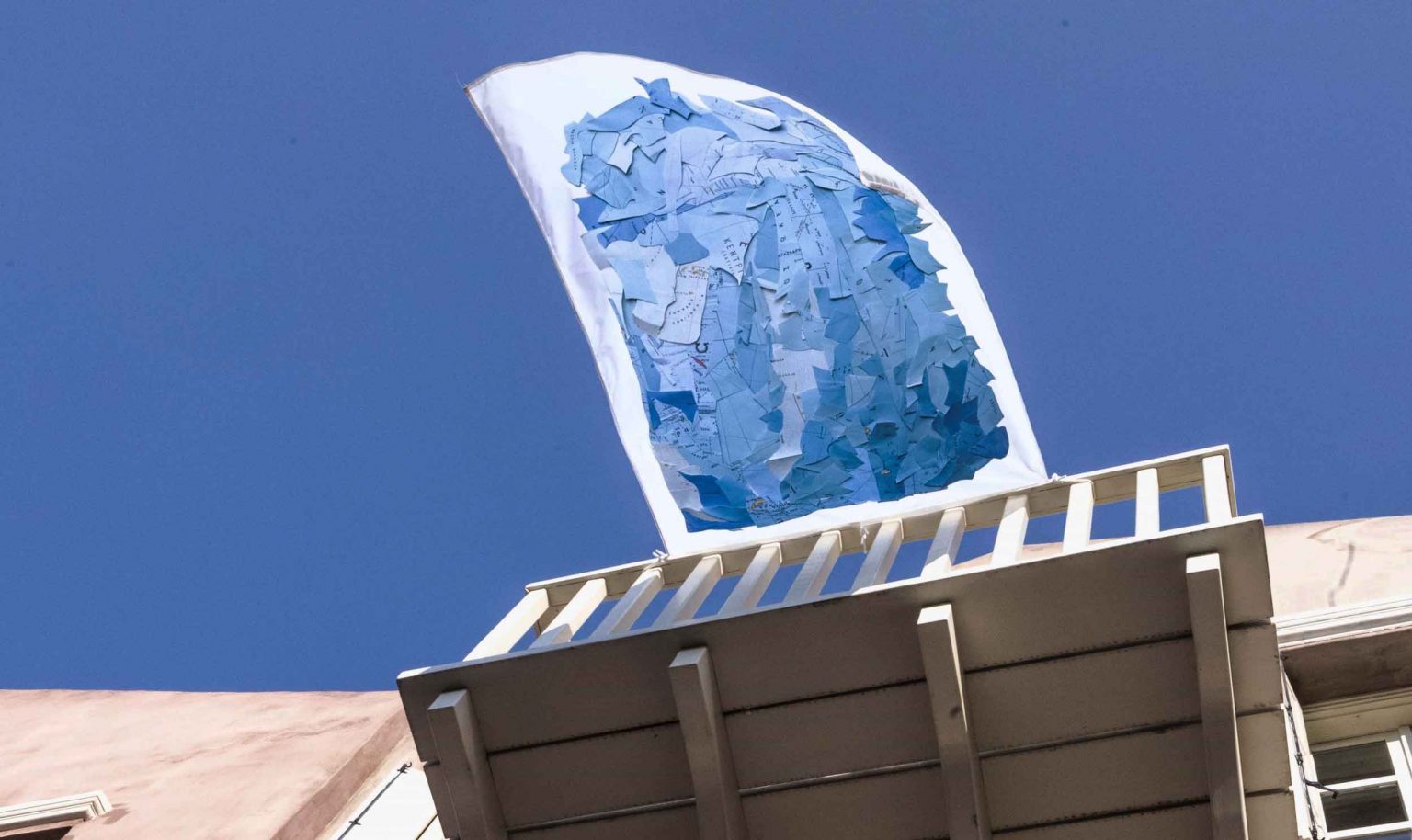 In these flags, many different seas are merged, signifying the unique ability of waterways to connect places. The sea for Kastellorizo ​​has always been a symbol of movement and connection, but also war and forced migration. What will it signify in the future?

The exhibition was well attended by not only tourists, but also soldiers stationed on the island and locals, the real target of the project. Many Kastellorizans expressed their gratitude for the show, thanking the curators for having created something unique on the island, something that they were not used to seeing, but discovered they loved. Others, among the tourists, questioned the legitimacy of bringing contemporary art to people who did not ask for it.

Regardless of the opinion, we believe that the gallery certainly succeeded in its goal of opening up discussions and even, hopefully,  acted as an incubator for new ideas regarding the future of the island.